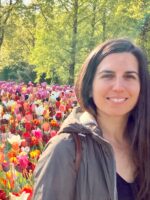 Virginia Passalacqua is an expert in EU law, migration law, and legal mobilization, which she investigates with a law in context perspective. She is interested in understanding how social movements and civil society actors use litigation at the EU level and, vice versa, how EU law impacts social justice, discrimination, and minorities’ rights.

Virginia holds a degree in law (cum laude) from the University of Bologna and a Ph.D. in EU law from the European University Institute, where she worked under the supervision of Professor Bruno de Witte. Her dissertation, Legal mobilization and the judicial construction of EU migration law, was awarded the Mauro Cappelletti Prize for the Best EUI Thesis in Comparative Law and her paper, “Altruism, Euro-Expertise and Open EU Legal Opportunity Structure: Empirical Insights on Legal Mobilization Before the CJEU in the Migration Field” was awarded the Ius Commune Prize 2020. Virginia’s work features in European and American journals such as Common Market Law Review, European Constitutional Law Review, and Law and Development Review.

Virginia is currently a postdoctoral researcher at the Utrecht Centre for Regulation and Enforcement in Europe (RENFORCE). Before she was a Postdoctoral Fellow at Collegio Carlo Alberto and at the University of Turin, and an Academic Fellow at Bocconi University. She held visiting positions at the London School of Economics and at Oxford University’s Refugee Studies Centre. She is part of the project “Equality Law in Europe: A New Generation” and she is one of the coordinators of the ADiM Young Researchers Lab, a network of young scholars working on migration.

As an Emile Noël Fellow, Virginia will work on her book on legal mobilization for migrant rights, where she sheds light on why civil society actors mobilize EU law in some countries but not in others

Unmobilized rights. Explaining the absence of EU litigation for migrant rights. Litigation before the EU Court of Justice (ECJ) is increasingly important to interpret and enforce the rights of migrants in Europe. Having understood this, cause lawyers, social movements, and NGOs have relied on the preliminary reference procedure to challenge national anti-migration policies. However, cases of supranational litigation come prominently from the same few countries, while nine Member States have never mobilized the rights of migrants before the ECJ. How can we account for this absence? What factors hamper legal mobilization before the ECJ? To answer these questions, this research analyzes two EU countries (Greece and Poland) where the EU rights of migrants remained “unmobilized”. By drawing on theories on EU judicial politics and legal mobilization, this paper investigates whether the absence of EU litigation can be explained by a lack of mobilizing actors or by factors external to these actors that prevent them from effectively mobilizing the law. In the first case, pro-migrant movements would be missing or lacking essential resources for legal mobilization. In the second case, the “legal opportunity structure” would be close, meaning for instance that there are obstacles in access to courts or national judges are unwilling to refer. While both mobilizing actors and an open legal opportunity structure feature in instances in which rights have been effectively mobilized, only cases of non-mobilization can shed light on the necessity and sufficiency of these factors. Non-mobilization is understudied in the legal mobilization field due, in part, to a selection bias: scholars tend to focus on successful cases of legal mobilization and disregard instances in which groups don’t try or ultimately fail to bring claims against their government. By closely studying two EU countries that experienced immigration but still lack preliminary references in their support, this research deepens our understanding of the role of mobilizing actors and the complex relationship between national political struggles, supranational courts, and the domestic judiciary.