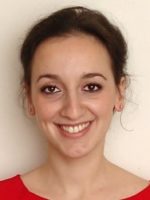 Vasiliki Kosta studied law at King’s College London obtaining the LL.B. in 2006 and the LL.M. in European Law with ‘Distinction’ in 2007. Subsequently she pursued her doctoral research at the European University Institute, Florence (EUI) on ‘Fundamental Rights in Internal Market Legislation’. She received the M.Res. (Master of Research) from the EUI in 2008 and was awarded the Ph.D. title in 2013. From 2009 – 2011 Kosta worked as a research associate at the Academy of European Law, EUI Florence. In 2011 Kosta was a law clerk at the Court of Justice of the EU in the chambers of Judge Koen Lenaerts, and she completed a traineeship at the EU Agency for Fundamental Rights in 2011/2012. Since 2012 Kosta works as an Assistant Professor of European Law at the Europa Institute of Leiden University. Kosta has acted as the coordinator of the LL.M. European Law programme at Leiden University, and she leads the research cluster on EU fundamental rights of the Europa Institute’s research programme ‘The Progression of EU Law: accommodating change and upholding values’. She teaches EU Law (institutional, constitutional and substantive) and ECHR Law at undergraduate and postgraduate level.