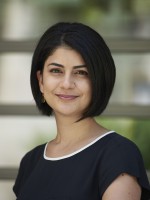 Turkuler Isiksel is Assistant Professor at the Department of Political Science at Columbia University. She holds a PhD in political science from Yale University and works primarily in contemporary political theory. In her work, Isiksel focuses on the ways in which concepts tailored to the nation-state apply to institutions that wield political power beyond that context, such as regional organizations, international economic regimes, and transnational courts.

Isiksel is currently completing a book manuscript tentatively entitled Europe’s Functional Constitution, which evaluates the extent to which constitutionalism, as an empirical idea and normative ideal, can be adapted to institutions beyond the state. The book addresses this question in light of the European Union’s legal order., and argues that the economically driven process of European integration has brought into being a supranational constitutional system that is neither liberal nor democratic, but functional.

Her other research interests include the evolution of ideas about commerce and international politics in eighteenth century political thought, as well as theories of sovereignty, delegated governance, citizenship, cosmopolitanism, constitutional theory, and Turkey-EU relations.

Before joining the political science faculty at Columbia, Isiksel held a Jean Monnet postdoctoral fellowship at the Global Governance Program at the European University Institute in Florence. She holds an undergraduate degree in Politics (MA Hons) from the University of Edinburgh.

During the 2014-2015 academic year, Isiksel served as a LAPA/Perkins Fellow at Princeton University’s Law and Public Affairs Program. During the summer of 2015, will hold a visiting research fellow at the Justitia Amplificata Centre for Advanced Studies at Goethe-Universität in Frankfurt-am-Main.

Freedom of movement is the quintessential liberal freedom. And yet, while scholars have attended to the phenomenon of human migration, they have neglected to take stock of an equally prominent dimension of global mobility, namely the movement of factors of production, namely goods, services, and capital. This book will argue that some of the most influential international institutions in existence today should be understood as mobility regimes, and embody a distinctive vision of global order that the book terms “commercial cosmopolitanism.” The aims of this project are threefold: first, to establish the centrality of the idea of commercial mobility within the development of a distinctive liberal tradition in Western political philosophy; second, to offer a reconstruction of the political ethos guiding existing international economic institutions in light of this intellectual lineage; and third, to marshal the universalist aspirations of the liberal tradition to critique the asymmetries of power and wealth promoted by the contemporary international regime of commercial mobility. The book will combine the perspectives of political theory, empirical political science, and international law in theorizing and appraising global economic institutions.