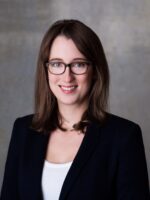 Stefanie Egidy is a post-doctoral researcher at the Max Planck Institute for Research on Collective Goods in Bonn, Germany. Her research examines how democratic states and their institutions react to pressure and change. It explores how to safeguard the resilience of the constitutional and administrative order with a special focus on the behavior of public actors. This overarching theme connects the different core areas of her research. Major pieces of her recent work focus on the role of central banks within the separation of powers system and the challenges for democratic processes arising from technological developments. Stefanie often takes a comparative legal perspective and uses empirical methods.

Stefanie studied Law at the University of Würzburg (Germany) and the University of Bergen (Norway). In 2009, she graduated first in the federal state of Bavaria. Additionally, she holds a Diploma in European Law. She completed a Master of Laws (LL.M.) at Yale Law School in 2011. Subsequently, she was a visiting researcher at Yale Law School (2011–2012) and Arizona State University College of Law (2012–2013). Back in Germany, she pursued the mandatory two-year clerkship, during which she, i.a., clerked for the President of the German Federal Constitutional Court. She is admitted to the bar in Germany and the State of New York.

Strategic Litigation Before Courts – A Theoretical, Doctrinal, and Empirical Study on Judicial Process. Strategic litigants use courts in order to pursue goals external to the judicial process. Often, they aim at furthering social change. Therefore, strategic litigation has led to and laid the groundwork for landmark decisions, especially in the United States where strategic litigation has a longstanding tradition. Recent efforts in Germany try to emulate these successes and simultaneously raise important questions of how the judiciary and the legal system should respond to this development. Strategic cases need to adhere to the procedural rules determining the access to court and admissibility of claims. Thus, recruiting a sympathetic plaintiff, choosing the right litigation tactic, and developing a media strategy are core tasks of strategic litigants. The other side of the equation consists of the legal framework in which strategic litigants act and of the judges who decide how cases move through the judicial system. My research aims to interconnect both sides and offer an empirically founded theoretical perspective on our concept of judicial review and independence within the democratic separation of powers system in view of strategic litigation. My project investigates how German courts react to increasing efforts of strategic litigation, how this challenges our understanding of the role of courts in a democracy, and how these developments can be reconciled with our current doctrines of access to justice (e.g., the rigid German standing doctrine) and judicial independence. First, it conceptualizes strategic cases as categorically different from regular cases in that litigation is more than a tool to solve conflict. Second, the project undertakes an empirical investigation into the scope and nature of judicial treatment of strategic litigation. Third, it ultimately asks whether the results should trigger changes in the law of judicial procedure and makes appropriate suggestions.