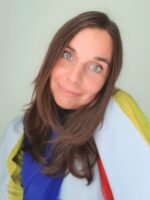 Pola is a tenured Assistant Professor in European Law at the European Studies Department of the University of Amsterdam. Before joining the University of Amsterdam, she has worked and studied at top academic institutions in seven different countries. She worked as Lecturer and Postdoctoral Researcher in Denmark (iCourts – the Centre of Excellence for International Courts at the Faculty of Law, University of Copenhagen) and Switzerland (Global Studies Institute at the University of Geneva and Chair of Public International and European Law at the University of Fribourg). During her PhD, she was enrolled in a double-degree Erasmus Mundus program in Belgium (Université libre de Bruxelles) and Switzerland (University of Geneva), with a fellowship of the European Commission. As a Visiting Scholar, she followed classes in the United States (Boston University and Harvard Law School). Pola studied in Germany (Humboldt University in Berlin) and United Kingdom (King’s College London). She graduated from the German “Staatsexamen” with honours. She has also worked as Trainee in Luxembourg (the Court of Justice of the EU) and Germany (Polish Embassy in Berlin and Clifford Chance LLP in Frankfurt). Pola speaks fluent Polish, English, German and French.

Judicial Activism in EU External Relations. The Court of Justice of the EU: Global Actor or Motor of European Integration?

The project analyzes judicial activism of the Court of Justice of the European Union (CJEU) in its case law concerning public international law. The project claims that the modus operandi of the Court is not much different in the external context in comparison to the role of the Court in the process of European integration internally. The CJEU’s case law is analyzed in a broader context, which includes the national backlash against European integration, the central role of the European Commission as the supranational organ representing the ‘common interest’ in the European Union (EU), the inherent vagueness of the EU Treaties, and the procedural arrangements limiting standing to institutional actors only.

The project relies on the concept of judicial activism to analyze the political considerations underlying the Court’s rulings regarding international law. The project problematizes the general logic of the CJEU’s judicial activism in the concrete domain of cases concerning international law and EU external relations. Judicial activism is generally defined as a hidden politicization of the CJEU. I seek to unveil this politicization by identifying symptoms relating to both judges defying separation of powers and the canons of socially acceptable judicial behavior. Judicial activism of the Court has broader implications on the position of the CJEU as a global actor. My argument is that while the current ‘introvert’  approach of the Court creates a legitimacy gap, as it does not take into account the interests and voices of the ‘third parties’ – actors outside of the EU – who are directly concerned by its ruling in EU external relations. In order to show that, the CJEU is analyzed in the context of the broader literature on international courts and tribunals.