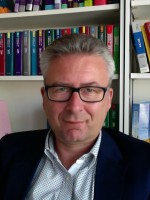 Professor Eeckhout’s research covers many areas of EU law and of international economic law. He has published papers on EU constitutional law, human rights law, internal market law, judicial protection, state aid law, and on various questions of WTO law. One of his main research interests is EU external relations, and his monograph on the subject is the leading text in this area.

Professor Eeckhout is particularly interested in the relationships between different legal systems, national, European, and international. His research into the legal effect of WTO law in EU law, and into the application of EU human-rights standards in national law is nurtured by this interest. He explores ways and means to interconnect and integrate legal systems so as to combat legal fragmentation

A Charter of Rights?

The EU Charter of Fundamental Rights, in full legal force for now more than 5 years, continues to be an ambivalent instrument. It is unclear what role it is intended to play in the EU’s constitutional framework and governance arrangements: whether it merely makes rights visible, or whether it is the cornerstone of the EU’s transformation into a human rights organization. This ambivalence also manifests itself in the case law of the EU Courts, which have not as yet developed a coherent conception of the Charter and its function. This research project focuses on the rights-bearing character of the Charter, and claims that that character is overlooked by most of the case law and academic commentary. The EU appears to hold on to a model of institutional justice – rather than one of individual justice. The aim of this project is to review the interpretation and application of the Charter from its rights-bearing perspective, in particular as regards the so-called “federal question”: the extent to which the Charter also binds the EU Member States. A coherent answer to that question is central to the Charter’s identity and future. Beyond this “federal question”, the project will examine other dimensions of the rights-bearing character of the Charter: questions of horizontality; the distinction between “rights” and “principles”; the relationship with EU citizenship; and the relationship with the EU’s constitutional values and objectives.