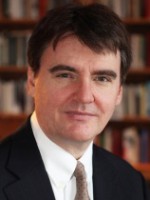 Peter L. Lindseth is the Olimpiad S. Ioffe Professor of International and Comparative Law at the University of Connecticut School of Law, where he is also Director of International and Graduate Programs. He holds a B.A. and J.D. from Cornell and a Ph.D. in European history from Columbia.  His expertise lies at the intersection of European integration, comparative administrative law, international economic law, and the legal history of public governance.  His work seeks to develop new insights into the fields of historical institutionalism, principal-agent theory, and governance beyond the state with implications well beyond the case of European integration in which he specializes.  Professor Lindseth has served as a visiting professor at Yale, Princeton, Tilburg (as KNAW Visiting Professor), the Université Panthéon-Assas Paris II, and the Université d’Aix-Marseille III, and he has also taught at Columbia Law School. He is currently serving a two-year term as visiting professor in the law and history of European integration at Queen Mary-University of London.  He has also served as a Daimler Fellow at the American Academy in Berlin, a Jean Monnet Fellow at the European University Institute in Florence, a Chatauebriand Fellow at the Conseil d’Etat in Paris, and a Stipendiat at the Max Planck Institute for European Legal History in Frankfurt. He was the founding chair of the European Law Section of the Association of American Law Schools (AALS) and the editor of the section’s blog, europaeus|law. Professor Lindseth also contributes to EUtopia Law, a London-based blog on the European Union.

The Dimensions of Institutional Change