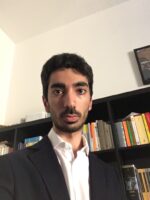 Orlando Scarcello holds a Ph.D. in Law from Sant’Anna School of Advanced Studies in Pisa, with a thesis on European Constitutional Pluralism. He previously was LL.M. Researcher at the European University Institute and International Visiting Graduate Student at the University of Toronto. His research areas are EU law, public law, and jurisprudence.