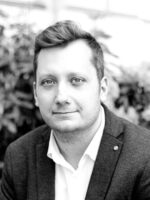 Michał Stambulski is a postdoctoral researcher at the Erasmus University Rotterdam, Netherlands and executive director at the Centre for Legal Education and Social Theory at the University of Wrocław, Poland. He was a visiting scholar at the Faculty of Law of the University of New South Wales, Australia and Oñati International Institute of Sociology of Law, Spain.

Michał did his master’s degree both in law and philosophy and holds a doctorate in legal theory from the University of Wrocław. From 2015 to 2020 he was working as an attorney in Poland with his practice focusing on cooperative and corporate law, civil representation, and pro bono cases in the area of freedom of expression and artistic freedom.

His research interest includes philosophy of politics and constitutionalism, legal theory and legal education. He is the author of the book “Wiadomość od cesarza. Pojęcie prawa w teorii analitycznej i postanalitycznej” (in Polish, Scholar 2020) on the concept of law in postanalytical legal theory. He is also co-author of three reports from empirical studies conducted on different stages of legal education in Poland. His recent publications deal with the problems of constitutional populism, legal mobilization, and strategic litigation in Central and Eastern Europe. During his time at the Jean Monnet Center, Michael will work on a project on the intersection of constitutionalism and the sociology of legal knowledge.

Embodying Constitutional Values. Ethnographic Inquiry into Polish Constitutional Court (1989-2022). This project involves ethnographic research on the Polish Constitutional Court as a locus of constitutional knowledge production. The central premise of the project is the claim that the authority of the Court and the related authority of the Constitution was created from 1989 onwards as an epistemic authority. The future judges were recruited from among law professors, and in their official decisions, they presented their knowledge as sure, based on unquestioned sources and ways of reasoning. At the same time, the pilot study already conducted (five qualitative interviews with former judges) indicate that the judges relied on multiple, different, and non-formalized sources and intuitions in their actions. Thus, in establishing the authority of the Court, there was a potential incompatibility, a disjunction between the official justification of knowledge and how it was acquired. The aim of the project is to examine the process of creating, stabilizing, and reconstructing the authority of constitutional values. It will be based on the empirical data provided by qualitative interviews with constitutional judges in Poland (10-12 interviews, 2-3 hours one) and the decisions issued by this court. Thus, the object of the study will be the processes of introduction, creation, and negotiation of knowledge by constitutional judges under conditions of the persistence of multiple constitutional and political traditions (communism, dissident ethics, liberal democracy). Starting from a local example of Poland, the project will be directed, through comparative research, to achieve general, global results concerning constitutional knowledge and values.