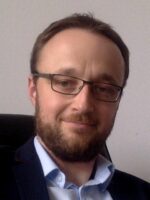 He is a Senior Research Fellow (Wissenschaftlicher Referent) at the Max Planck Institute for Comparative and International Private Law in Hamburg, and an Assistant Professor at the Institute of Law Studies of the Polish Academy of Sciences in Warsaw. He is also an Affiliated Fellow at the Information Society Project at Yale Law School. Previously he was a Max Weber Fellow at the European University Institute in Florence (2019–2020), a Fellow jointly at Edmond J. Safra Center for Ethics and Blavatnik Interdisciplinary Cyber Research Center at the University of Tel Aviv (2018–2019). He was also a recipient of the Fox Fellowship at Yale University (2018–2019) and several scholarships of the Polish Ministry of Science and Higher Education, the Foundation for Polish Science and the Polish National Science Centre. He has been working as the Member of the Office of Studies and Analysis of the Supreme Court of Poland and as an expert analyst for the Polish Ministry of Justice.

His research interests encompass European Union private law, the contract law theory and the intersections between contract law and new technology. Currently he focuses his work on private regulation in online platforms’ economy, and on the adaptation of EU consumer protection law to the realities of digital economy. He is also interested in the evolution of contract law in Central Europe, with particular regard to the reception of EU private law.

The Paradox of Consumer Protection in the Platform economy. My research for the Emile Noël Global Fellowship at NYU focuses on the consumer protection rules and policies developed by online intermediary platforms, such as Uber, Airbnb and eBay. Entities of this sort play a strong regulatory role, setting forth rules and infrastructure for suppliers to conclude contracts. A number of these instruments address, in various ways, the typical issues of consumer law (such as information imbalances, abuse of bargaining power, or unsatisfactory quality of goods and services). In this regard, however, consumer policies are underpinned by a clear paradox. On the one hand, platforms, as private entities acting for profit, should hypothetically have a strong interest in enhancing their own economic utility, without intervening too deeply in “horizontal” contracts concluded between their participants. On the other hand, each intervention may not only increase the level of transaction costs, but also reduce the number of contracts concluded on a platform, entailing a decrease of immediate gains for the platform. The Project delves into the nature and the further ramifications of this paradox. It focuses on identifying the functional rationale for the private party’s seemingly altruistic market conduct. In doing so, it will critically scrutinize the general hypothesis, that increase of consumer welfare is in fact a spillover effect of a platform pursuing its own economic goals (especially of an attempt to attract new clients with a safe contracting environment). In a further step, the Project will focus on the regulatory policy issues. It will try to answer a broader question: whether, and if so to what extent, private enterprises such as platforms may contribute to fulfilling the public goal of consumer protection (intentionally or de facto sharing this task with public regulators) and to what degree platforms’ norm-setting activities require direct regulatory intervention.