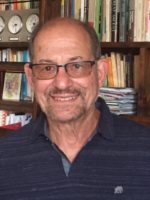 MARTIN A. SCHAIN is Professor of Politics, Emeritus, at New York University.  He is the author of The Politics of Immigration in France, Britain and the United States: A Comparative Study (New York: Palgrave, 2008/2012); co-author and editor of Comparative Federalism: The US and EU in Comparative Perspective (Oxford, 2006), Shadows Over Europe: The Development and Impact of the Extreme Right in Europe (Palgrave, 2002) and Europe Without Borders: Remapping Territory, Citizenship, and Identity in a Transnational Age (Johns Hopkins, 2003).  His  book, The Border: The Politics of Borders in Europe and the United States is currently in press with Oxford University Press.  He has taught in France, and lectured through­out Eu­rope.  Professor Schain is the founder and former director of the Center for European Studies at New York University, and former chair of the European Union Studies Association.  He is co-editor of the transatlantic scholarly journal, Comparative European Politics

The Politics of Asylum in Europe and the United States. On both sides of the Atlantic, asylum and refugee policy provide rules of entry that have little to do with the normal rules and limits on entry that have been developed for immigration.  Nevertheless, as asylum issues have become politicized, the entry of asylum-seekers has been conflated with the larger issues of immigration, integration and security. Although both systems provide for means and justifications for entry, there is a contradiction between the assumptions of immigration and asylum regimes that have confounded the assumptions of each.  Asylum is treaty-based, while immigration is based on national legislation.  Policy under the rules of asylum tends to be open-ended in terms of the number of asylum-seekers permitted to be admitted, assuming that they meet the criteria of “well-founded fear of persecution,” but restrictive in practice, in terms of actual admission.  Policy under immigration regimes tends to be restrictive as defined by law and administration, but often more open in practice.  Therefore, how entry is framed both by the state and those seeking entry becomes crucial.  In addition, special cases, for immigrants, but especially for refugees and asylum-seekers, have always distorted policy on both sides of the Atlantic. For this project, I will first examine the ways that asylum has been framed and understood by American and European governments since the Convention Relating to the Status of Refugees was signed in Geneva in 1951.  In this context, I will also look at more specific asylum-policy obligations and limits that governments have assumed through legislation over time.  I am particularly interested in how governments have related asylum commitments to more general immigration policy.  I will then explore variations in patterns of policy implementation—asylum recognition, admission and expulsion—as a way of understanding political change.  I will then investigate the political process through which variations in policy implementation have evolved.