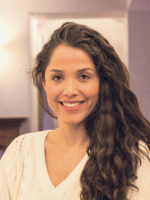 Mariana Velasco-Rivera is a postdoctoral research fellow at the Alexander von Humboldt Chair of Comparative Constitutionalism held by Professor Ran Hirschl at the University of Göttingen, Germany and a guest researcher at the Max Planck Fellow Group in Comparative Constitutionalism at the Max Planck Institute for the Study of Religious and Ethnic Diversity.

Mariana holds a J.S.D. and an LL.M. from Yale Law School, and an LL.B. from Instituto Tecnológico Autónomo de México (ITAM). In 2016-2017 she was a Yale Fox International Fellow and a visiting researcher at the Center for Global Constitutionalism at the WZB Berlin Social Science Center. From 2010 to 2014, Mariana served as Law Clerk at the Supreme Court of Mexico at the chambers of judge José Ramón Cossío Díaz.