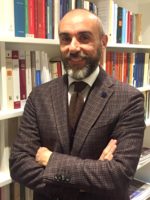 From 2013 to 2017 he served as a law clerk to Justice Professor Giuliano Amato at the Constitutional Court of Italy, in particular dealing with the proceedings concerning legislative disputes between the State and the Regions. He was also legal adviser to an MP (2001-2003) and to the Vice President of the Standing Committee on Finance and Treasury at the Italian Senate (2003-2006).

He authored the following books: «The Senate of the Autonomies. Reasons, Models, Happenings» (Cedam, 2010) and «Perspectives of Interpretation and Application of the Italian way of “Federalism”», (Cedam, 2007). Together with Professor Franco Bassanini, he edited «Semplify Italy. State, Regions, Local Autonomies» (Passigli, 2008).

He has also authored more than 50 essays, published in academic journals and collective books, on the following overarching areas: Regional Law, Constitutional Justice, Parliamentary Law. He is currently writing a monograph on the “domestic justice” of the constitutional bodies, that is to say the exclusive power of such bodies to reserve the adjudication of labor disputes brought by their own staff members to internal adjudicatory bodies, which can rule with definitive effect, consequently precluding to these employees their fundamental right to access justice.

Between Unity and Federalism: paths of territorial differentiation in the EU. The strengthening of intergovernmental Union due to the Treaty of Lisbon has contributed to increase support for independence in countries like Spain and United Kingdom, where nationalist pressures were already widespread. Brexit is calling into question not only the relationship between the United Kingdom and the European Union, but also the very future of the United Kingdom’s own union. In Spain, the Catalan crisis and the enforcement of Article 155 of the Constitution have highlighted the need of a constitutional reform to solve the problematic aspects of Spanish regionalism. Territorial differentiation, however, concerns also countries in which the unity of the State is not in danger. In Italy, after the failure of the constitutional referendum held in December 2016, some Ordinary Regions have called to be granted «additional special forms and conditions of autonomy», pursuant to Article 116 (3) of the Constitution. In France, the birthplace of uniformity, President Macron has recently introduced a constitutional bill which amends Article 72 of the Constitution, providing «un principe de différenciation territoriale» and giving constitutional safeguard to Corsica’s special statute. Therefore, a strong push toward territorial differentiation is currently crossing the whole European Union. The research project aims to examine, both in a national and supranational perspective, and with a comparative approach, the ongoing trends of territorial differentiation in those countries, looking for similarities and differences, opportunities and risks of imitation. The goal is to test whether the territorial differentiation can still be considered an instrument to manage conflicts within the State and beyond the State. The very final endpoint of the project is to demonstrate the need for a constitutional differentiation also in the institutional framework of the European Union, in order to overcome the intergovernmental relations’ logic and to allow the States which are ready, to step forward and get an ever closer political integration.