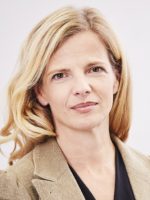 Johanna Hey is Professor of Tax Law and Public Law and Director of the Institute of Tax Law at Cologne University, Germany.
She studied Law at the University of Würzburg and in Cologne and in 1996 received her Doctor Juris (Ph.D. equivalent) at the University of Cologne. Her Ph.D. thesis was awarded the German Tax Law Association´s Albert Hensel medal. She gained her qualification to be called to a professorship (Habilitation) with her award-winning post-doctoral research thesis on Certainty in Tax Planning in 2001, also at the University of Cologne.
Before taking up her professorship in Cologne she held the Chair for Business Taxation at Düsseldorf University in Germany from 2002 to 2006. She has also taught at the University of Münster in Germany and at Leuven/Tilburg University in Belgium/Netherlands. In 2007 she was attached to NYU Law School as Senior Emile Noël Fellow and was appointed as Global Professor in spring term 2015.
She has been a member of the Advisory Board of the German Ministry of Finance since 2004 and Research Director of the Institute for Finance and Taxation in Berlin (a non-profit research institute founded by commerce and industry in Germany) since 2010. She has chaired the Scientific Council of the German Tax Law Association since 2011 and is a member of the Scientific Advisory Board of the Centre for European Economic Research in Mannheim.
Johanna Hey is editor in chief of a leading legal commentary on German personal and corporate income taxation. In 2015 she was appointed editor in chief of the highly rated research-oriented tax law journal Steuer und Wirtschaft, and she is on the editorial board of several other German tax journals.

THE POST BEPS WORLD: DO OECD AND EU NEED TO ALTER THEIR STRATEGIES? In 2015, the OECD released the final BEPS reports whose measures shall tackle base erosion and profit shifting. At that time it seemed that the OECD initiative was supported by the international community at large. Especially the European Commission committed itself to the OECD recommendations. However, at the same time other countries, namely the United States, departed from the international consensus and took or announced own measures without regarding their compatibility to the OECD approach. Furthermore, the BEPS initiative was not able to halt tax competition; the race to the bottom has rather accelerated. The pressure on the general corporate tax rates is growing. Only two years after the final BEPS reports have been released, the question is not only whether the OECD found the right answers to the detected problems but also whether the problems are still the same. The first part of the research project aims to analyze the changes which the international tax environment has undergone during the OECD BEPS project. The analysis will not be restricted to legislative measures already taken but will also consider recently discussed options for fundamental reforms of the international tax system, e.g. the Destination Based Cash Flow Tax. Some of these measures deviate significantly from the conservative approach the OECD took to solve the problems of the international tax system. One of the issues to be analyzed in the second part of the research is whether the OECD should stick to this self-limitation and continue its conservative BEPS approach or whether they should start contemplating more radical reform options. The third part will bring the European Union and their strategy to transform the OECD recommendations into binding EU law into focus.