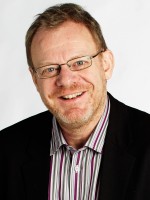 Jan Klabbers was born in the Netherlands (in 1963) and received his master’s and doctor’s degrees from the University of Amsterdam. Having taught international law and EU law at the same university, since 1996 he is a professor of international law at the University of Helsinki. Currently, he is on leave from his regular position in order to serve as the first Martti Ahtisaari Professor of International Conflict Management and Peace Research, a five-year research position funded by the Academy of Finland. In this capacity he is working on a project envisaging a credible ethics for global governance.

Klabbers has received all possible teaching awards available at the University of Helsinki, and was elected to the Finnish Academy of Sciences and Letters in in 2014. He has held visiting positions at, amongst others, NYU Law School (2009-10), the Graduate Institute for International and Development Studies (2008, 2013, 2015), and the University of Paris-II (2011). In 2013, a Festschrift to mark his fiftieth birthday was published.

The work on role-responsibility is part of a much larger project which focuses on the development of a framework for applying Aristotle-inspired virtue ethics to global governance. The underlying idea, put simply, is that since rules always need persons to interpret and apply them, there might be some merit in studying the character traits of persons who would make suitable global governors, and how these traits play out with respect to different offices or professional roles. It might be claimed, e.g., that honesty is a virtue, but it would seem that honesty might demand different things from an international judge than from the secretary-general of the United Nations. The project at large is an attempt to flesh this out with respect to a number of positions in global governance: directors-general, leadership of NGOs, the international judiciary, international expert advisors, et cetera, and a number of virtues (honesty is an obvious one, but one may also think of temperance, courage, and others). With the exception of a small body of literature on the judiciary, little or no serious academic work connecting this brand of ethics to global governance has been done.

The work on role-responsibility is part of the larger project, but can also stand on its own. It aims to investigate whether it is fruitful to think, when discussing the responsibility of international organizations in particular, in ways that take their role into account. The intuition is that it may be too simple to project our everyday ethical impulses to entities such as organizations which, after all, have been endowed with a particular task, and some of their activities may be directly related to the exercise of those tasks. Hence, the aim is to contribute to the theory of international responsibility. This will result, it is expected, in a journal article, to be submitted to a leading peer reviewed journal.

In addition, I will devote some time to the project at large, in particular with a view to addressing the connection between law and the virtues, and I hope to do some work concerning the office of the United Nations Secretary-General.