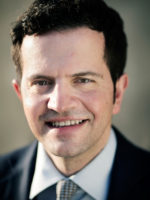 Giuseppe Mazziotti is a 2018/2019 EU Fulbright Scholar and an Emile Noël Global Fellow at New York University (NYU) School of Law. He is an Assistant Professor in intellectual property law at Trinity College Dublin (on leave). Giuseppe specializes in copyright, media law, antitrust and information technology law, data protection, EU law and cultural policies. From 2009 to 2011 he was an Assistant Professor of intellectual property law at the University of Copenhagen. Giuseppe was Visiting Scholar at the University of California, Berkeley (2004/2005), Columbia Law School, New York (2010/2011), Pompeu Fabra University (2017) and ESADE Business School, Barcelona (2017). He was a Fellow of the Berkman Center for Internet and Society at Harvard University (2011/2012), the Istituto de Technologia e Sociedade, Rio de Janeiro (2015) and the Centre for Media Pluralism and Freedom at the European University Institute in Florence (2017). Giuseppe is an Associate Fellow at the Centre for European Policy Studies (CEPS) in Brussels, where he co-managed the CEPS Digital Forum from August 2012 until December 2013, leading a multi-stakeholder task force on ‘Copyright in the Digital Single Market’. Prior to joining CEPS, he advised IFPI (Representing the Recording Industry Worldwide), the European Commission (DG CONNECT), the European Parliament (DG for Internal Policies) and the Italian Ministry for Cultural Heritage and Activities on various projects concerning intellectual property law and information technology. From 2007 to 2012 he practised law as associate and counsel at Nunziante Magrone (Rome). Since December 2012, he has worked as an independent consultant advising individual authors and performers, content producers, start-ups and Internet and media companies. Giuseppe holds a cum laude law degree (2001) from the University of Perugia, a Master of Research (2003) and a PhD in Law (2007) from the European University Institute in Florence and master degrees in clarinet performance (1997) and chamber music (2003) from the Music Conservatory of Perugia.

The future of professional creativity on social networks and user-generated content platforms: a EU-US perspective on copyright and liability of online intermediaries. My research proposal focuses on the role of social media in online dissemination of copyright works from both a legal and economic perspective. My work entails an analysis of how the proliferation of generalist and specialized platforms and social networks has impacted on the economic value of professionally produced works in Europe and in the United States. The project relies on the assumption that professionalism in content creation, in various domains of the creative sector, is crucial to preserve goals that are of constitutional relevance in liberal democracies. The research proposal consists of an analysis of the copyright laws and of the online liability standards implemented in the European Union and in the United States in the realm of social networking and user-generated content platforms. After having identified – on the grounds of empirical evidence - categories of works (for instance: music, films, newspapers, photographs) for which a problem of insufficient remuneration has materialized, my work will provide a critical review of the standards of liability for online platforms and of the technologies (e.g. repertoire databases, content recognition technologies) that are essential for the future of professional creativity in digital settings. My proposal aims at understanding whether and how the existing licensing solutions and online enforcement measures can preserve the logic of incentive and reward underlying copyright (especially in favour of individual authors and small content producers) without frustrating the purpose of enabling a free flow of online information. A comparison between Europe and United States is particularly important at a time when the European Union, in its attempt to unify digital markets and to create a ‘quasi-federal’ level of copyright regulation, might enact new forms of contractual protection of individual creators (authors and performers), broader rights for online press publishers and new standards of liability for providers of social media platforms.