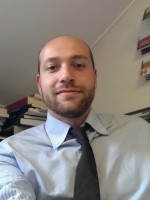 is a post-doctoral research fellow in Public Law at the LUISS University of Rome, where he also coordinates a Master’s Program in Parliament and public policies. After having obtained a PhD in Constitutional law from the University of Genoa, he was legal advisor to the Committee on Legislation of the Italian Chamber of deputies.

He lectured at LUISS and at the University of Florida and was also Euossic Visiting fellow at the Monash University in Melbourne. Most of his career has been devoted to the study of the interdependence between the democratic principle and lawmaking. In 2010, his monograph on the rational basis of parliamentary procedure has been awarded with the annual prize of the Italian Constitutional Law Association. Then he was teaching assistant to the Jean Monnet ad personam Chair of Prof. Andrea Manzella, focusing on the democratic principles in the EU. Now he is tackling the concepts of “law” and “legislation” in the European legal space, investigating whether and to what extent the Treaty of Lisbon may have opened the way to a parliamentarization of the EU.

The research project aims to answer the following (intertwined) questions: “how is the emerging judicial system of protection of fundamental rights in Europe affecting the traditional role of National Parliaments as law-makers”? and “is the current trend risking to deprive the rights protection of its original link with the democratic principle”?

The goal is to test the endurance of the legality principle in its primary meaning, namely its connection to the democratic legitimacy beyond the mere compliance with the legal framework. In particular, it is to explore whether it is still possible to recognise some kind of preference to democratic-based legislation (e.g. the law approved by National Parliaments as representative assemblies) in the discipline of fundamental rights, as it is (or, perhaps, it has been) typical of the civil law tradition.

In the traditional Nation-State in continental Europe, the very idea of a reservation to parliamentary legislation has been symbolizing the link between the system of the sources of law and the equilibrium in the form of government: in that context, the centrality of the representative institutions has been mirrored by granting the highest rank to that source of law stemming from the constitutional body incarnating popular legitimacy.

The main objection against this approach arose from the general suspicion towards the implementation of the rule of law through parliamentary statutes, because of their foundation on majority decisions, and from a preference for the guaranteeing of rights on the part of the judiciary. However, a focus based exclusively, or mainly, upon courts and upon judicial protection of rights might weaken the added value deriving from political participation through parliamentary bodies, potentially affecting the democratic nature of law-making and the transparency of its proceedings.

Thus, the ultimate goal of this project is to propose a re-assessment of the overall system of protection of fundamental rights, deepening the possibility to re-locate the role of Parliaments as law-makers and investigating whether they may represent the only actors potentially able to give “the right answer” where Courts shall step behind.