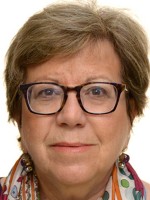 She is a director at the European Commission and since September 2011 is responsible for the Athens Office of the Task Force for Greece. A service created to assist the Greek Government in implementing structural reforms.

She joined the European Commission in 1981 and prior to her present job, has held several managerial and senior positions in different sectors of the Institution. She has been a member of Commissioner Vasso Papandreou Cabinet (1989-1992) as well as Director for Maritime Transport (1998-2001).

In 2005, she became Director for Consumer Goods (automotive, pharmaceutical, foodstuff, cosmetic medical devises), for other sectors of industry as well as for innovation. In that capacity.she participated in many regulatory and business dialogues with the USA, China, India and Japan.

In 2011 she became Director for Energy in the European Commission’s Directorate General for Energy.  Her responsibilities included the elaboration of 2050 roadmaps, energy policy strategy, international relations and enlargement as well as communication and inter-institutional issues.

From March 2001 to September 2004, on unpaid leave from the Commission, she worked in Greece as the President, first of the Information Society SA, and then of the Greek land registry, KTIMATOLOGIO SA.

The institutional aspects of a bailout in the Eurozone and comparison with the USA.

The fiscal crisis that emerged in Greece in late 2009 (Ireland was, albeit for different reasons, already in turmoil by then) and, some months later, in Portugal followed by Cyprus., was an unprecedented political and institutional event in the Eurozone, and, through the Eurozone, in the EU. The crisis, starting from its Greek facet, has triggered several political developments, of fiscal (and/or more generally: financial) content and of important institutional relevance. The general idea was and remains that the Eurozone, assisted by IMF, would and will grant to the Member States concerned financial assistance so that they can avoid bankruptcy, but under strict terms, tough surveillance and under a not less strict conditionality. The creation of EFSM, EFSF, ESM through instruments of international - as opposed to European Union Law - went along with substantial constitutional and more generally institutional rearrangements within the Member States concerned. This crisis creates a space for a comparative study of the existing bail-out legal and administrative structures in a federal state- the USA being a typical paradigm- and the emerging { as a result of the crisis) such structures and procedures in the EU. An important part of the general idea of the project is to proceed to such comparison on the basis of the European recent insight 9 regarding in particular the crisis in the Eurozone) and the American experience ( in particular the case of the default of California). Based on my legal background, my over 30 years' experience as an official of the European Commission and my recent experience as Head of the Greek Office of the Task Force established by the EU to offer to the Greek State assistance in implementing the commitments undertaken in exchange for the financial support program, I will focus my research on the institutional aspects of this support program and on the implementation of the structural reforms agreed within the framework of the financial support program. I will also compare with institutional set-up, including conditionalities, for bailouts within a federal state such as the USA. I wil! mention to the necessary extent, but I will not discuss much further, the financial aspects of the program, nor will I enter into an evaluation of the fiscal consolidation program, as defined in the relevant Memoranda of Understanding signed by Greece with the European Commission, the IMF and the ECB. I propose to work on the Greek case, which I'm best familiar with. Regarding the methodology of my study, typically, I will prepare a detailed plan of the subject and of the organization of the study. I will then collect the necessary data and analyze them and I will offer specific and final remarks.