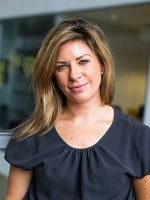 Dr. Elaine Fahey is Senior Lecturer at the Institute for the Study of European Law (ISEL), the City Law School, City University London. She is Associate Dean for Internationalization and co-convenor of ISEL. She was previously a Senior Postdoctoral Researcher at Amsterdam Centre for European Law & Governance (ACELG) at the University of Amsterdam, a Max Weber Fellow at the European University Institute (EUI), Florence and was previously an Assistant Lecturer and Lecturer in Law in Ireland (Dublin Institute of Technology; Trinity College Dublin). She has practiced as a Barrister and was Chairperson of the Irish Society for European Law. She has been a visiting fellow at the University of Michigan, Ann Arbor, the College of Europe, Bruges, the Institute for Advanced Legal Studies and the Global Governance Programme, Robert Schuman Centre, EUI, Florence. She has been a stagiaire at the Court of Justice of the European Union in Luxembourg, a Judicial Research Assistant, Four Courts, Dublin and a Judicial Extern, Los Angeles District Court.

Her research interests span the relationship between EU law and global governance, the EU’s Area of Freedom, Security and Justice and the study of postnational rule-making, and are the subject of over 40 publications including books, articles, edited volumes and special issues, including a forthcoming monograph, The Global Reach of EU Law (Ashgate, 2016) and the multi-disciplinary edited volumes The Actors of Postnational Rule-Making: Conceptual Challenges of European and International Law (Routledge, 2015) and A Transatlantic Community of Law (Cambridge University Press, 2014).

In 2016, she has been awarded a British Academy/ Leverhulme Research Grant for the project Between Internal Laws and Global Practices: UN Instruments in the EU’s Area of Freedom, Security and Justice and is Co-PI from 2017-2021 on Horizon 2020 Marie Curie (MSCA) Innovative Training Network led by the University of Birmingham on the Transatlantic Trade and Investment Partnership (TTIP).

A TAXONOMY OF THE EU’S GLOBAL APPROACH TO LAW-MAKING’ This project considers articulations of the global approach of the EU to law-making. It does this by contrasting the EU acting, firstly, as a legislator and as a global legal actor and secondly, both empirically and theoretically. The project reflects critically upon differences between internal and external approaches to the explicit articulation of global aims in EU law.  Ostensibly, what can be termed as the ‘global’ approach of EU law-making appears highly explicit and transparent in the external context (e.g. in security (PNR, cyber-crime & cyber-security) or trade (TTIP), less so in the internal context (e.g. extra-territoriality, externalization of the internal market). What are the reasons for this difference? Why does the external context appear so transparent and open less so the internal context? The project engages in a systematic mapping of the EU’s explicitly ‘global’ approach to law-making in both internal and external EU law and policies holistically. It contrasts the express articulation or lack thereof of a global dimension, approach and effects in the EU’s internal market law and policy (‘the internal’) with the EU’s security and trade agreements (‘the external’), between 2010 and 2015, i.e. in the post-Lisbon legislative and political cycles. It looks holistically at rule-making techniques rather than rules-based approaches. This project then considers how to understand the development of the global approach to law-making in a broader context, focusing upon the EU’s standards of normative conduct and its institutional evolution, focusing upon openness or transparency and institutionalization.  This project asks: how do these developments impact upon the EU’s global approach to law-making? The project is an original and empirically based project which will develop a new taxonomy of EU law in a global context.