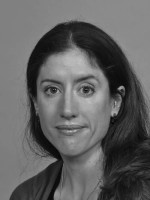 is an Associate Professor in EU law at the VU University of Amsterdam, Netherlands, and the Co-Director of the VU Centre for European Legal Studies. She holds a DPhil in law from Somerville College, Oxford University as well as an LLM from King’s College London and a Jur Kand (LLM) from Stockholm University.  Her recent publications include a monograph on the constitutional dimension of European criminal law (Hart publishing, Oxford 2012).

She has recently received a personal research grant (VENI) funded by the Netherlands Scientific Organisation for a research project entitled ‘ Balancing the Area of Freedom, Security and Justice in a Multi-Speed European Union’ (2013-2015), which is the project she will be working on during her time at the NYU.

Balancing the Area of Freedom, Security and Justice in A Multi-Speed Europe

The EU principle of proportionality is one of the most fundamental EU legal axioms at present: it is a true umbrella concept underlying all Union activity. Within the EU policy area of freedom, security and justice (AFSJ), proportionality reasoning seems however to be largely absent from the legal discourse. The AFSJ deals with civil law, immigration, border control, security issues and criminal law, and is closely connected to national sovereignty and human rights protection. In criminal law related matters, however, the EU currently pushes forward with preventive measures to ensure a high level of security. Yet this approach may lead to an imbalanced and unjust regime where human rights are not adequately protected. One way of preventing such imbalance is to introduce a general proportionality test to the AFSJ. Security needs to be balanced with freedom, so that the EU lives up to its promise of delivering justice. The project’s hypothesis is that an application of proportionality would help to ensure good governance within the increasingly multi-speed AFSJ and also serve as a crucial adjudication tool. In addition, the contention of this project is that the EU could learn from the debate on Global constitutionalism and transnational law more generally by asking how proportionality as a transitional mechanism could adequately balance the AFSJ.

This project aims to: (1) critically investigate the proper meaning of proportionality in the AFSJ (2) identify the EU’s constitutional values in the AFSJ and the implications of balancing as a means of good governance in a multi-speed Europe (3) propose improvements to the law, with the aim of reconciling interests and resolving conflicts to the greatest degree possible.