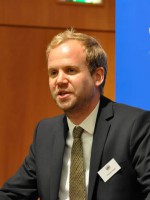 a DAAD Visiting Fellow at NYU, is a Senior Fellow at Freie Universität Berlin. He studied law in Regensburg, Aix-en Provence and Potsdam and obtained his first State exam (1. Staatsexamen) in 2004 as best of his class. Dominik then worked as a Research Assistant at the University of Potsdam. At that time he also a received a scholarship for his Ph.D. Thesis by the Konrad-Adenauer-Stiftung. In 2008/2009 he worked as a lecturer at the University of Potsdam. For his Ph.D. Thesis “The Ban on Torture in Public International Law and the ‘War on Terror‘” (2010, summa cum laude) he received the Wolf-Rüdiger-Bub Award in 2011.

From 2009 until 2011 Dominik accomplished his “Referendariat” with stages inter alia at the Higher Regional Court Berlin, the German Foreign Office, the European Center for Constitutional and Human Rights, Berlin and the International Criminal Tribunal for Rwanda, in Arusha, Tanzania.

Since 2011 Dominik works as Senior Fellow at the Freie Universität Berlin where he teaches Public International Law, European Law and Administrative Law. His research focuses on Human Rights Law, Humanitarian Law, the United Nations, General Public Law, European Law and Public Law. Right now he is working on his Habilitation entitled “The Participatory State: Democracy and Participation”. From September until December 2012, Dominik was a research fellow at Stellenbosch University, South Africa where he co-hosted a German-South African Conference on Democracy.

The Separation of Powers Doctrine and the Power of Participation: Citizen's Influence in Delegated Rule-Making in the United States, the European Union and Germany.

The envisaged study on "The Separation of Powers Doctrine and the Power of Participation: Citizen's Influence in Delegated Rule-Making in the United States, the European Union and Germany" aims at developing a model of participation in the exercise of all public authority, i.e. with regard to all three branches of government. The study will follow a new approach, because although participation and direct democracy are being much discussed in academia for a number of years now, the discussion is limited to only one branch of government. By concentrating on only one branch, the participation discussion falls short to understand the underlying mechanisms of participation. The research shall aim at developing a model in order to answer two important questions: firstly, who shall participate in the exercise of public authority and secondly, with what legal effect shall participation take place.

As these questions cannot be answered by participation itself, an understanding of the separation of powers doctrine as the organizational principle balancing collective self-determination and individual self-determination shall be utilized in order to conceptualize participation. This is appropriate as the separation of powers doctrine as well as participation are concerned with the protection of individual rights, (partaking in) collective decision-making and the efficiency of public authority.