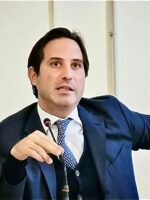 He clerked for the Italian Constitutional Court from 2017 to 2021 (Justice Augusto Barbera).

He is currently member of the board of the Italian Association of Constitutional Lawyers and Vice President of the Council for Statutory Guarantee of the Emilia-Romagna Region (advisory institution in charge to guarantee the Italian Constitution and the Emilia-Romagna Regional Fundamental Chart – “so called: Statuto regionale” – against their violations brought by the regional law proposals).

He developed national and international experience, working on international projects at the University of Bologna and Milan. He authored or coauthored about eighty academic publications including seven books (two monographs) on freedom of speech, judicial review of legislation, national and European federalizing process, multilevel constitutionalism, constitutional theory, financial provisions of the constitution. His current main research interests are focused on freedom of speech in digital environments and the constitutional design of the majority principle.

Freedom of Speech Reloaded.  Rethinking theorical foundations and regulatory framework of public discourse in the digital age. The research proposal aims at a reconsideration of freedom of speech theories and of the regulatory framework of public discourse in the digital age. Traditionally, freedom of speech has been considered as a shield against the intrusiveness of the public authority and a mean lo legitimize the government. Social pluralism and the digital revolution require a reconsideration of these assumptions: the twenty-first century is much more pluralist, involving multiple players represented by nation-states and supranational actors; private internet-infrastructure companies which design the cyberspace; the speakers participating in the digital public discourse; the audience receiving messages, who may be harmed by their content. The overall goal will be pursued through a multi-step approach. Firstly, it will compare the traditional theoretical elaborations with the theories placing freedom of speech in the digital space. This analysis will also follow a more comprehensive assessment able to understand how constitutional values, conceptualized for the world of atoms, may be extend to the world of bits. Secondly, the theoretical approaches will be empirically tested in the light of the attempts, offered by the legislative or independent authorities in Europe (European Union and Member State) and the U.S., to regulate the cyberspace. Thirdly, theoretical framework and legal designs will be assessed through a case-law raised before (national and supranational) courts and internal bodies or para-jurisdictional panel erected by the digital platforms. Concerning this last aspect, it will be crucial to examine the case law raised before the internal bodies established by the digital corporation to assess hard cases on freedom of speech matters (such as the Facebook’s Oversight Board). This systematic perspective will allow to explore (1) sound legal regulations and (2) judicial doctrines coherent with the idea that conceives freedom of speech in the digital forum as a (social) power calling for a public, constitutional oriented, regulation. In the digital realm, public power might be conceived not as a freedom-invader, but as a conflict solver, in charge of guarantee the openness and the equal access to the public sphere.