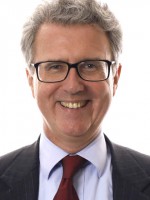 is Professor of Human Rights and Equality Law, Queen’s University
Belfast, and William W. Cook Global Law Professor at the University of Michigan Law
School. He is a graduate of Queen’s University Belfast (1970-1974). He was awarded a
Harkness Felllowship in 1974 and spent two years at Yale Law School (1974-76), and then at
Oxford University as a doctoral student, first at Nuffield College (1976-77), and then at
Balliol College as a Junior Research Fellow (1977-80). He was elected as Fellow and Tutor
in Law at Lincoln College, and CUF Lecturer in the Oxford Law Faculty in 1980, and
Professor of Human Rights Law in 1998. He is a barrister at the English Bar (Gray’s Inn) and
has been called to the Northern Ireland Bar; he is a Non-Resident Tenant at Blackstone
Chambers. Specializing in human rights, he concentrates on issues of equality and
discrimination, as well as the relationship between international economic law and human
rights. He is the author of Buying Social Justice (Oxford University Press, 2007), a book about
the relationship between public procurement and equality, for which he was awarded a
Certificate of Merit by the American Society of International Law in 2008. He serves on the
editorial boards of several journals, including the Oxford Journal of Legal Studies, the
International Journal of Discrimination and the Law, and the Journal of International Economic
Law, and is co-editor of the Law in Context series. He serves on the European Commission’s
Expert Network on the Application of the Gender Equality Directives. In 2006, Queen’s
University, Belfast, awarded him an honorary LLD. He was elected a fellow of the British
Academy in 2008, and in 2011 he was awarded a three-year Leverhulme Major Research
Fellowship.

My research investigates the legal meaning of human rights, their significance in theory and in practice, and the approaches taken by legal institutions that protect and advance them. The approach adopted will be ‘law-led’ but informed by other disciplinary perspectives. My research builds on my extensive previous work and will develop an integrated theory of comparative human rights law. This ‘integrated’ theory will consider that body of law from several differing perspectives. My aim is to bring together and bridge these differing legal and non-legal perspectives to enable a description of human rights law to emerge that explains not just the legal rules and principles, but also their context. As a result, the rules and principles become more meaningful to non-legal actors. This approach also helps to contribute to the translation of the rules and principles into practical action by those in the legal system. The legal perspectives I draw on are: comparative law, international law, several ‘external’ approaches to law, and legal practice. A successful study of this type will have significant impacts on judicial decision-making and political policy, as well as legal and nonlegal scholarship. My intention is to draw on the different perspectives to be discussed below to provide a richer, fuller, and more integrated picture of a complex phenomenon, one which is well on the way to becoming of paramount global significance, both legally and politically.