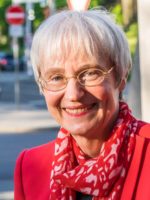 Christine Landfried is Professor Emerita of Political Science at the University of Hamburg, Germany. She currently holds the Max Weber Chair in German and European Studies at New York University. She has studied Political Science, History, and International Law at the University of Heidelberg and at Harvard University. She was president of the German Political Science Association from 1997-2000. Since 2016, she holds the chair of the WZB Berlin Social Science Center’s Scientific Advisory Board. She analyzes the role of constitutional courts in democracies, the impact of campaign finance on democratic legitimacy and the process of European integration. With her work on the European Union she aims at exploring the conditions that allow to enhance the positive potential of cultural, economic, and political difference for democratic governance. She has recently been awarded with the Schader Prize of the Schader Foundation, Darmstadt. Her publications include Constitutional Review and Legislation (1988), The Judicialization of Politics in Germany (1994), Parteifinanzen und politische Macht (Campaign Finance and Political Power, 2nd ed. 2004), Das Entstehen einer europäischen Öffentlichkeit (The Emergence of a European Public Sphere, 2004), Das politische Europa (The Political Dimension of Europe, 2nd ed. 2005), Difference as a Potential for European Constitution Making (2006), The Concept of Difference (2011), and Never-Ending Crisis? Germany and the Future of Europe (2013

Democratic Legitimacy and Decision-Making of Transnational Courts: The European Court of Human Rights. The topic of the proposed project is the relationship between democratic legitimacy and methods of decision-making of transnational courts. Since the second half of the 20th century we are observing that not only national constitutional courts but increasingly transnational courts decide political questions with far-reaching political effects. My research question is how these courts can exercise their influence in a legitimate way. I am starting from the normative assumption that the power of transnational courts is legitimate as long as these courts reach their decisions with methods that are to a certain extent different from politics and as long as they are responsive to public opinion. Transnational courts have to fulfill these normative criteria under demanding conditions. They have to provide justice in individual cases and at the same time they must find common standards in spite of weak social foundations of transnational law. How do transnational courts cope with this challenge? I will address this question in an empirical study of the judgments of the Grand Chamber of the European Court of Human Rights from January 1999 to April 2016 with regard to freedom of religion and to freedom of expression. The empirical research will focus on the methods of decision-making, the argumentation, the use of comparative law, transnational judicial discourses and the interactions with civil societies and public spheres. The aim of the project is twofold. First, I want to find out whether the Strasbourg Court meets the normative criteria of legitimacy which are according to my assumption a mode of deciding that is different from politics and responsive to public opinion. And second, I want to explore whether the specific conditions of transnational judicial decision-making being national diversity and weak social foundations of transnational law have effects for the substance of judicial review.