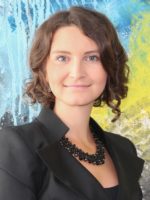 Caroline Heber is a Senior Research Fellow at the Max Planck Institute for Tax Law and Public Finance as well as a Post-Doctoral Research Associate at the Institute for Austrian and International Tax Law at Vienna University of Economics and Business (WU). She lectures on European Union law and tax law both at University Munich (LMU) and at WU Vienna. Previously, Caroline was a Fellow at the Ross Parsons Centre at Sydney Law School and the University of Graz. She holds both a master degree from Sydney Law School and a PhD from the University of Graz, Austria. Her doctoral thesis on special issues within the European VAT system was honored with several prizes, both on a domestic and international level.

Caroline’s expertise lies at the intersection of European Union law, international law and tax law and has been the subject of her numerous publications, such as book chapters, articles and a monograph. Her research work on the EU financial transaction tax led to three major articles in peer-reviewed journals. One was awarded the IBFD Derivatives and Financial Instruments Award in 2014.

Enhanced Cooperation Procedure and European Tax Law. In recent years, member states are increasingly using their veto power to stop any attempt to enact law on European Union level. Especially in fields where unanimity is required, such as direct tax law, even one single member state is able to block any legislative act. A lack of consensus between the member states leads to stagnation of the European integration process, as well as to laws that become outdated and unable to deal with new economic realities. It has been acknowledged quite early that the framework of the European Union is not built for a group of nearly thirty member states. To overcome some of the issues that stem from the increasing diversity in economic and political as well as cultural, historical and social matters, the notion of differentiated integration was implemented in the EU Treaties in 1999. Since the Treaty of Lisbon, this mechanism, the Enhanced Cooperation Procedure, allows at least nine member states to establish an enhanced integration or cooperation in an area covered by the EU Treaties but not falling within the European Union’s exclusive competence. This research project aims at analyzing the Enhanced Cooperation Procedure in the field of tax law. At present, a comprehensive study on this mechanism is missing in the legal literature and thus this research will fill a fundamental gap. The value of this research project follows from its policy and legal analysis of the Enhanced Cooperation Procedure. Thus, this work looks, on the one hand, at the current provisions implemented in the EU Treaties as well as their impact on the European integration process and the internal market concept. On the other hand, the work examines ways to improve the current mechanism especially with respect to the rights of non-participating member states.