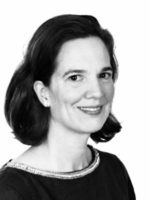 Anne Witt is Associate Professor of Law at the University of Leicester, where she teaches competition law and European Union law.

In 2015, Anne was a visiting fellow at the European University Institute (EUI), where she researched and wrote a monograph on the growing role of economic theory in the interpretation and enforcement of EU competition law (The More Economic Approach to EU Antitrust Law, Hart 2016), which was funded by the British Academy. Anne has published on diverse issues of competition law in journals such as the Common Market Law Review, European Law Review and European Competition Journal, and is especially interested in the interaction of law and economics in the area of competition policy, as well as the cross-fertilization between the competition law systems of the European Union, its Member States and the United States. She was appointed an independent legal adviser for the provision of expert advice in the area of EU law to the European Parliament in 2017.

Prior to her legal education, she graduated in piano studies from the Conservatoire de Musique de Genève.

Big Tech, Competition and Consumer Welfare.  The digital economy raises many novel questions for competition law enforcers, who have to balance the aims of protecting consumers against the dangers of anti-competitive conduct and not unduly stifling innovation in markets that are central to the digital economy and society. Over the past fifteen years, the European Commission and the national competition agencies of the EU Member States have rigorously investigated and fined powerful tech giants such as Google, Microsoft, Amazon and Facebook for breaching EU and national competition law. In the United States, despite reasonably similar legal rules, the same conduct has gone unsanctioned. Given that most of the leading tech players are US companies, the European approach to intervening in these markets has led to a considerable degree of tension between the United States and Europe. This project aims to contribute to the transatlantic dialogue in this area by determining and critically assessing the reasons for the different enforcement outcomes in Europe and the United States. To this end, it will analyze a wide range of enforcement instruments used by the European and US authorities, in particular the decisional practice of the European Commission and the national competition agencies of the EU Member States, cases filed by the US antitrust authorities, judgments by European and US courts, soft law instruments issued by the European and US enforcement agencies, as well as their contributions in international fora such as the Organisation for Economic Cooperation and Development (OECD) and the International Competition Network (ICN).