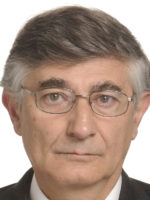 Italian nationality, studied Law at Florence University, Italy, and a Master at European Centre in Nancy, France. Began my career (1977) as advisors on European affairs to a major Farmers organization (Confagricoltura), Rome, Italy and later (1978) as advisor to the Association of Industry, in the textile region, Prato, Italy. Started working for the European Parliament (1981) as researcher in the Agriculture Department, then to the secretariat of the Committee on Budgets (1989), as senior administrator. Remained in the budget sector, as Advisor to the Director-General, head of the secretariat of the Budget committee and Director for Budgetary Affairs. In 2008 was appointed Director of the EP Library, Archive and Transparency until end 2015, when I retired. Appointed European Parliament Fellow at the Robert Schuman Centre, EUI, in October 2014, with the specific task to build up links with the EP Research Service and the EUI. In particular conducted a research on the budgetary powers of the European Parliament. Since 2004 have given courses on European Public Finances at European College of Parma, Italy. In January 2015, was appointed visiting Fellow at the Robert Schuman Centre for Advanced Studies, European University Institute, Florence to continue research in the European budgetary affairs. In 2016, gave course at LUISS University Rome, for a Master course (EUPADRA). Speaker at numerous seminars, conferences, workshops in Europe.

The financing of EU: what next? How a reform of the EU financing mechanisms could contribute to the relaunching of the European project. The reform of the European Union has been, for a long time, object of academic studies. Two new drives for reform appear now on the scene, which might accelerate the reform process:  The decision of the United Kingdom to leave the European Union will oblige Member States and EU Institutions to reflect on the future of the European project.  The elections in a number of Member States has revealed that an increasing part of public opinion is opposed to the multilateral relationships, liberalization of the economy, and globalization of the markets and ultimately the European Union. And this is not only seen in Europe. So far, these movements have failed to be majority, but their dimension obliges European Leaders to take measures to give an answers to the worries of the Eurosceptic population. Many European Leaders are aware that the momentum for reform is gaining ground and that the “business as usual” approach is no longer an option. The Commission has already taken the first step in launching an ‘option’ paper on the Future of the EU. EU Budget is a key element of the reform in each of the five options. The research will aim to analyses the contribution that the reform of the EU Finance mechanisms can give to the relaunching of the European project. The research questions will focus both on the revenue and expenditures side of the budget. How can the reform of the financing mechanisms influence a new approach of Member States? Is a reform of the expenditure structure of the EU Budget possible without touching the “acquis”? Which EU budget for which European project? The research will conclude outlining the desirable and possible scenarios for the relaunching of the European project.